Home / Blog / Quest for happiness in Japan or what business opportunities the Land of the Rising Sun can offer to Lithuania?

On 15th March Vilnius University Oriental Studies center hosted the third annual conference on the development of business ties between Japan and Lithuania, organized by Baltic Asia. This year the speakers discussed about the Japanese market and what it can offer to Lithuanian businessmen.

The representatives of 2 companies: „Linen Tales“ manager Borisas Symulevicius and „Cuddle Cuddle“ founder Dalius Kazlauskas were sharing their experiences and answering questions from the audience.

Many roads lead to Japan

Even though Japan seems extremely attractive because of its huge potential buying force, Lithuanian businessmen are often frightened by the long distance, cultural differences and language barrier.

„Linen Tales“ manager revealed, that he was determined to draw attention of the Japanese buyer: the company was actively participating in international exhibitions and fairs, moreover, Borisas himself visited various cities of Japan on numerous occasions, trying to directly meet the potential clients and mediators. Borisas was stressing the importance of direct contact. According to him, businessmen willing to present their product in Japan should not be greedy and get a ticket to Japan in order to meet their potential clients and mediators in person:  this is the key to success. Borisas believes that the case of his company is quite unusual – it only took a couple of months  until they started exporting their linen goods to Japan. Both speakers agreed that it is unexpectedly fast, and usually takes much longer.

„Cuddle Cuddle“ story is a bit different, more personal. The founder of the company, Dalius Kazlauskas, decided to start the business  mostly because of his Japanese wife Aya Kazlauskiene. It was her who first thought of an idea to export Lithuanian traditional handcrafts to Japan. At the moment „Cuddle Cuddle“ offers a variety of Lithuanian designers-made accessories, however the couple is considering to start a line of original „Cuddle Cuddle“ brand goods.

For the Japanese, Lithuaniaremains a mysterious , undiscovered land

Both speakers agreed, that for the Japanese, Lithuania remains an undiscovered land. The sign „Made in Lithuania“ doesn‘t mean much to them. Lithuanian products in the Land of the Rising Sun are oftened presented as „Made in Europe“ , or are linked to the popular in Japan Scandinavian design. Dalius Kazlauskas agrees with Borisas Symulevicius – Lithuanians shouldn‘t try too hard presenting the product as „made in Lithuania“. According to him, the Japanese value European and Scandinavian products – they are often associated with sophisticated luxury items, so for Lithuanian businessmen it would be a good idea to present their goods with these keywords.

The language opens many doors

During the discussion, both speakers mentioned the language barrier. Japanese archipelago is known for its cutting-edge technologies ang gigantic market, however, even in the age of globalization, it remains quite a closed community. Only a small percentage of the Japanese – usually youth – can speak fluent English. That is why even beginner level Japanese could be really helpful in gaining trust and respect of the Japanese partners.  Borisas Symulevicius mentioned, that greater success comes to those, who hire a translator while on a buisness trip to Japan, or, for instance, participating in a fair. Dalius Kazlauskas agreed that the Japanese tend to trust more those business partners with whom they‘ve seen in person, that‘s why communication solely throug emails can stay in stagnation for years. Website localization question was also discussed. „Cuddle Cuddle“ website is fully localized in Japanese language, and for those who want to sell their products in Japan, Japanese version of a website is a must. Borisas company‘s website features Lithuanian, English and Russian versions, but he is planning to add Japanese in the nearest future.

Both speakers agreed that the Japanese market is quite unique in its requiements for product design and quality. Borisas Symulevicius said that high Japanese quality standarts are not a mere myth. „Linen Tales“ manager told that once or twice the Japanese side returned the whole package because of barely noticeable defect on one or two items.  Dalius Kazlauskas urged Lithuanians to put extra attention to the quality of the products they are going to send to Japan. Speaking of the design, some of the items have to be specifically adjusted for the Japanese market. For example, linen belt sizes had to be changed because many Asians are physically smaller than the Europeans.  Both speakers added that the Japanese choose natural materials and prefer calm colors, but do not avoiding bright accents as well. They noted that Japan is famous for its gift culture, and the wrapping of an item is extremely important and sometimes can even be the decisive factor behind the commercial success. D. Kazlauskas said that the wrapping can constitute up to a half of the price. He suggests introduce special „gift wrapping“ service for an additional fee for those who are selling their goods online. 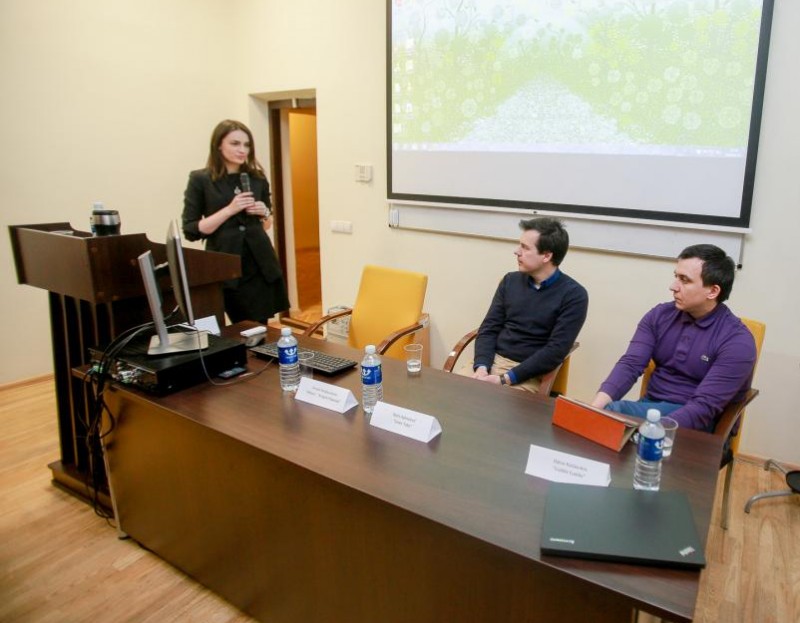 Logistics is not a problem

Despite huge distance between Japan and Lithuania, neither of the speakers encountered any serious problems with logistics. D. Kazlauskas mentioned that for the Japanese it is important to receive the ordered item as fast as possible. That is why it would be wise to offer the customers service which allows them to track their order. Also it might be a good idea to store part of the goods in Japan, so the delivery time noticeably shortens.

The specifics of e-commerce in Japan

During the conference, D. Kazlauskas made a presentation about the specifics of online commerce in Japan. He introduced the most popular onlince platforms and social networks which are used by the Japanese  for both personal and business communication. For the commerce platforms, the most popular one is largely unknown in Lithuania „Rakuten“, on the 2nd place – Japanese „Amazon“. „Kakaku.com“ is another useful website which allows to compare the prices in different shops. As for the social networks,  „LINE“ application is an unarguable leader. The number of „Facebook“ users is also growing. Among the search engines, „Google“ is first, while „Yahoo“ is second. D. Kazlauskas stresses the importance of using the platforms and websites popular in Japan in order to successfully promote the products.

During the presentation, the audience was surprised by the unexpected potential target audience. According to D. Kazlauskas, quite considerable amount of online shoppers is 30-40 year old men with higher income. For them the price of an item is not an issue. The taste of the Japanese shoppers is also quite different from the Lithuanians – they pay a lot of attention to their style, image. Products, that Lithuanians might consider „weird“ or „feminine“, for example, „feminine“ design handbags, are of a high demand in Japan among men, as long as the item is presented as „unisex“. While comparing the Japanese and US citizens, D. Kazlauskas noticed, that the Japanese tend to spend much more money online shopping.

How can Lithuanians impress Japan?

In the end of the discussion the speakers shared their ideas on what products could draw attention of the Japanese market. Despite being famous for its technological innovations, novelties reach Japan much later because of the strict social order and hierarchy. Lithuanians could offer the Japanese new innovative technologies, mobile applications. Designers could offer their products as well. However for those in food industries it is much more difficult to establish themselves in the Japanese market because of extremely strict sanitary regulations.

For the beginners in business, however, it would be a good idea to start from more familiar markets, such as Europe, USA or Australia – Japan shouldn‘t be the first country on the list.

As a conslusion, the speakers encouraged  other businessmen to share their experiences and ideas about enterpreneurship in Asia.In other Baltic countries it is a common practice, however, not so much in Lithuania. The speakers stressed that  it is expensive and difficult to enter the Japanese market alone, and it is better to cooperate. Lithuanians shouldn‘t fear entering  the Japanese market because of competitiveness  – it is wide enough to fit everybody.

„Baltic Asia“ expresses its deep gratitude to Dalius Kazlauskas and Borisas Symulevicius for their time and insights, and to all guests who actively participated in the discussion.

Author of the article: Mindaugas Kličius